Bureaucracy in America: The Administrative State’s Challenge to Constitutional Government 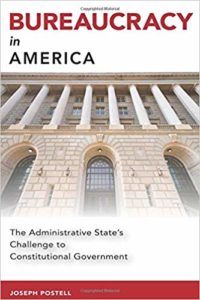 The U.S. Constitution requires laws to be made by elected representatives. Today, most policies are made by administrative agencies whose officials are not elected. Not coincidentally, many Americans increasingly question whether the political system works for the good of the people. In this trenchant intellectual history, Postell demonstrates how modern administrative law has attempted to restore the principles of American constitutionalism but has failed to be as effective as earlier approaches to regulation.

“Federal bureaucracy often seems to roam far beyond what Congress has clearly authorized and often does so without meaningful check from the courts. Postell’s book demonstrates that Americans have worried about over-reaching officials since colonial times. Bureaucracy in America shows what we can learn from past efforts to secure the people’s rights, even from government officials.” —Jeremy A. Rabkin, George Mason University, author of Law without Nations?

“The labyrinthine edifice of administrative law can be neither wholly reconciled with the nation’s deepest principles nor wholly efface them, and Postell’s clear explication of what is at stake in this complex subject will make this book a landmark in the field.” —Johnathan O’Neill, Georgia Southern University, author of Originalism in American Law and Politics: A Constitutional History

Author:
Joseph Postell is an Assistant Professor of Political Science at the University of Colorado-Colorado Springs. He is the editor of two books: Rediscovering Political Economy (Lexington Books, 2011), with St. Vincent College’s Bradley C.S. Watson, and Toward an American Conservatism (Pallgrave Macmillan, 2013), with Georgia Southern University’s Johnathan O’Neill.