Making a return trip to Columbia, MU alumnus James E. Fleming, The Honorable Paul J. Liacos Professor of Law at Boston University School of Law, will give a lunch hour talk at the MU Law School unpacking the potential consequences of the Dobbs V. Jackson ruling for all substantive due process decisions protecting personal autonomy and bodily integrity (see abstract below). The talk will be held on March 8 at 1pm in Hulston Hall 112.

In Dobbs v. Jackson Women’s Health Organization, the Supreme Court overruled Roe v. Wade and Planned Parenthood v. Casey, which had protected the constitutional right of pregnant persons to decide whether to terminate their pregnancies. Justice Alito’s 5-4 majority opinion in Dobbs denied that it “cast doubt” on any other precedents. But Justice Thomas’s concurring opinion said the quiet part out loud: that all of the substantive due process decisions protecting personal autonomy and bodily integrity—including the rights to use contraceptives, to “same-sex” intimacy, and to “same-sex” marriage—were “demonstrably erroneous” and should be overruled. Are these rights next? Is the Supreme Court just getting started? Many liberals and progressives (including feminists, queer theorists, and critical race theorists) have feared so. Many conservatives have hoped so. Others have tried to draw lines.

To address these issues, we have invited James E. Fleming to discuss his timely and important new book, Constructing Basic Liberties: A Defense of Substantive Due Process (University of Chicago Press, 2022). Professor Fleming will argue—in terms of Bob Dylan’s prophetic “A Hard Rain’s A-Gonna Fall”—that in Dobbs we can hear “the roar of a wave that could drown the whole world” of personal autonomy and bodily integrity that should be protected through the doctrine of substantive due process. These basic liberties, he argues in his book, are necessary to extend ordered liberty and the status of equal membership in our political community to all. 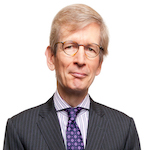 James E. Fleming is The Honorable Paul J. Liacos Professor of Law at Boston University School of Law. His many books include Constructing Basic Liberties: A Defense of Substantive Due Process (University of Chicago Press, 2022); Fidelity to Our Imperfect Constitution: For Moral Readings and Against Originalisms (Oxford University Press, 2015); Ordered Liberty: Rights, Responsibilities, and Virtues (Harvard University Press, 2013) (with Linda C. McClain); Constitutional Interpretation: The Basic Questions (Oxford University Press, 2007) (with Sotirios A. Barber); and Securing Constitutional Democracy: The Case of Autonomy (University of Chicago Press, 2006). After earning his A.B. at University of Missouri (Political Science), he received a Ph.D. in Politics from Princeton University and a J.D. from Harvard Law School. He has held faculty research fellowships at Princeton University’s Program in Law and Public Affairs and Harvard University’s Edmond & Lily Safra Center for Ethics. He is the former Editor of Nomos, the annual book of the American Society for Political and Legal Philosophy, and the past President of the Society.