“Lincoln, the Founding, and the Challenge of Self-Government,” Colloquium with Washington and Lee Professor of Politics Lucas Morel

In a talk delivered on Lincoln’s Birthday (Feb. 12), Lucas Morel, John K. Boardman, Jr. Professor of Politics and Head of the Politics Department at Washington and Lee University, will examine Lincoln’s political thought through the lens of how it was influenced by the principles of the U.S. Founding and the structures and political practices of the early American republic (see abstract below). The talk will be held at 3:30pm via Zoom. Parties interested in attending can contact Thomas Kane, KaneTC@missouri.edu, for a Zoom link, which will be sent on the morning of the talk.

“Lincoln, the Founding, and the Challenge of Self-Government” argues that the most important influence on Lincoln’s political thought and practice is what he learned from the principles of the Founding—especially the Declaration of Independence—and the structures and political practices of the early American republic, especially the U.S. Constitution, federalism, and the rule of law. At moments of political crisis, statesmen typically hark back to the fundamentals of the regime. In Lincoln’s case, he thought the growing agitation over slavery’s future could best be addressed by reclaiming the principle of human equality found in the Declaration of Independence and working toward the ultimate extinction of slavery. He also thought the founding attitude toward slavery was not an acceptance of slavery but a toleration of it as a necessary evil. It was not created by the founders but was a pre-existing condition, which they anticipated would be eliminated over time through the operation of the free principles and institutions put into motion by the American Revolution. 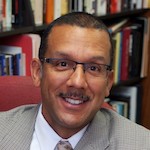 Lucas Morel is the John K. Boardman, Jr. Professor of Politics and Head of the Politics Department at Washington and Lee University. He holds a Ph.D. in Political Science from Claremont Graduate University. Prof. Morel is the author or editor of several books, including Lincoln and the American Founding (2020), published in the Concise Lincoln Library Series of Southern Illinois University Press. Prof. Morel is a trustee of the Supreme Court Historical Society, former president of the Abraham Lincoln Institute, and a consultant on the Library of Congress exhibits on Lincoln and the Civil War and was formerly a member of the scholarly board of advisors for the Abraham Lincoln Bicentennial Commission. He also currently serves on the U.S. Semiquincentennial Commission, which will plan activities to commemorate the founding of the United States of America.