“The Missouri Compromise, Black Americans, and the Problem of State Citizenship in the Antebellum United States,” Colloquium with Northwestern Prof. Kate Masur

In a talk underscoring the importance of questions of state citizenship in the 19th-century U.S., Northwestern Associate Professor of History Kate Masur will unpack the national impact on antebellum politics and legal history of the debates that raged over acceptance of the proposed 1820 Missouri constitution, given its instruction that the legislature bar African Americans from migrating into the state. The talk will be held via Zoom at 3:30pm on February 19, and interested parties can email Thomas Kane, KaneTC@missouri.edu, to be added to an email list of people who receive Zoom links for all Kinder Institute talks on the day of events.

After Congress decided in 1820 to admit Missouri as a slave state, a great debate ensued about whether to accept the proposed Missouri constitution, with its instruction that the legislature bar African Americans from migrating into the state. Historians have often dismissed this “second” Missouri debate as disingenuous and have underestimated its outcome. This paper shows, however, that the second Missouri Compromise made a significant impact on antebellum politics and legal thought, including in the state of Missouri. It asks us to set aside our modern assumption that citizenship is a national status and examine the importance of state citizenship in the antebellum United States. 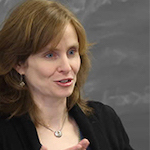 Kate Masur received her Ph.D. in History from University of Michigan and currently serves as Associate Professor of History at Northwestern University, specializing in 19th-century U.S. History with particular focus on how Americans grappled with questions of race and equity after the abolition of slavery. Prof. Masur is author of Until Justice Be Done: America’s First Civil Rights Movement, from Revolution to Reconstruction (W.W. Norton, forthcoming 2021), and she has published work in The Journal of the Civil War Era, where she is now co-editor, and American Journal of Legal History, among other places. Prof. Masur was likewise part of the editorial team that created Reconstruction: The Offiicial National Park Service Handbook, and she co-authored, with Gregory Downs, The Era of Reconstruction, 1861-1900, a National Landmark Theme Study. She also authored An Example for All the Land: Emancipation and the Struggle over Equality in Washington, D.C. (University of North Carolina Press, 2010), and has edited or co-edited a number of volumes, including University of North Carolina Press’ 2015 The World the Civil War Made.