The first Fall 2020 meeting of the Missouri Regional Seminar on Early American History, which will be held via Zoom, will feature discussion of Saint Louis University Associate Professor of History and African American Studies Katrina Thompson Moore’s article manuscript, “The Wench: White Male Caricaturization of Black Women in the Jacksonian Age,” which examines the white male anxieties, fear, hatred, and desires toward black women that were expressed in the Jacksonian Age, blackface minstrel show caricature of the wench (see abstract below). The meeting will be held on the afternoon of September 25, and Eventbrite invitations will be sent out during the second week of September. A Zoom link will then be sent out the week of the event to all parties who RSVP, and a downloadable copy of the article manuscript to be discussed can be accessed here.

The history of the blackface minstrel show of the nineteenth century is often dominated by male caricatures such as Jim Crow and Zip Coon. Although these caricatures are well-known from this entertainment genre, there is another major character type that needs to be placed back into the larger conversations on this era: the wench. This article will examine the white male characterization of black womanhood through blackening up and cross-dressing of Ethiopian Delineators in an effort to fully recognize the complicated history of the wench of the nineteenth century and its continued manifestations today. Through an examination of the term and caricature wench, as associated with black women, this article will illustrate the complicated history in which black women were placed as malleable objects that could be transformed into creatures of sexualization, victimization, ridicule, and aggression. Minstrel men of the nineteenth century used gender and racial disguises for more than to entertain; these cultural performers expressed white male anxieties, fear, hatred, and desires toward black women in the changing times of the Jacksonian industrial age. 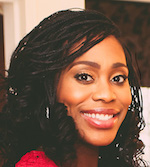 Katrina Thompson Moore received her M.A. and Ph.D. in History from SUNY-Stony Brook and currently serves as Associate Professor of History and African American Studies at Saint Louis University. She is the author of Ring Shout, Wheel About: The Racial Politics of Music and Dance in North American Slavery (University of Illinois Press, 2014), and her articles and book chapters have appeared or are forthcoming in Popular Culture Studies Review, Black Women, Gender, and Families, and America and the Black Body (ed. Carol E. Henderson), among other places. She was an Erskine A. Peters Fellow in the Department of Africana Studies at Notre Dame and a Visiting Professor of History at Roanoke College before coming to SLU, and held a Race and Gender Postdoctoral Fellowship at Rutgers University during 2013-14.

“A Union, Not a Nation-State: The Constitution as a Federal Treaty,” Zoom Colloquium With King’s College London Historian Max Edling

One Woman, One Vote: The Long Road to Ratification of the 19th Amendment12:00am ... See MoreSee Less

Why not a Woman? The Improbable Life of Eliza Lucas Pinckney in the Age of Revolution8:30pmThe State Historical Society of Missouri ... See MoreSee Less