In partnership with the MU Afro-Romance Institute, who had originally scheduled this talk as part of their March 2020 “Haiti in the Atlantic World” conference, University of Virginia Professor of African Diaspora Studies Marlene L. Daut will weave the genealogies of Michel-Rolph Trouillot’s history of the Haitian Revolution into the much longer history of Haitian thought to unsettle colonial hierarchies of knowledge and create a decolonial intellectual history of Haiti. The talk will be held via Zoom at 3:30pm on October 23. Email Thomas Kane, KaneTC@missouri.edu, to be added to the list of people who get Zoom links for events on the day that they are occurring.

In this talk, I trace some of the genealogies of Michel-Rolph Trouillot’s Ti Dife Boule sou Istwa Ayiti (1977), which constitutes the first history of the Haitian Revolution written in Haitian Creole. By returning to Trouillot’s earliest scholarly engagement with the history of the Revolution—which was wholly influenced by nineteenth-century Haitian historians—I argue that to fully grasp how Trouillot developed the mode of inquiry he adopted in Silencing the Past, we must consider its genealogy in a much longer history of Haitian thought, one that begins with Haitian writers from the earliest years of independence, such as Baron de Vastey and Thomas Madiou. Connecting Trouillot’s line of thinking to some of the earlier Haitian intellectuals he cites, rather than solely the European scholars whose works he is acknowledged to have read, is a necessary step in creating a decolonial intellectual history of Haiti; in so doing, we can continue to “un-silence” the past of the Revolution in popular discourse, while at the same time disrupting and unsettling the colonial hierarchies of knowledge that have placed male European intellectuals who identify as white at the top of the philosophical and historical discourses of the “West.” 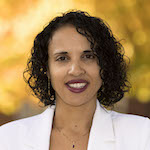 Marlene L. Daut has a B.A. in English and French from Loyola Marymount University, and she earned a Ph.D. in English from the University of Notre Dame in 2009. She is currently Professor of African Diaspora Studies in the Carter G. Woodson Institute and the Program in American Studies at the University of Virginia. Before joining the faculty of UVA, Daut was Associate Professor of English and Cultural Studies at Claremont Graduate University. She has been the recipient of fellowships from the National Humanities Center, the Ford Foundation, and the National Endowment for the Humanities (NEH). She is the author of two books, Baron de Vastey and the Origins of Black Atlantic Humanism (Palgrave, 2017) and Tropics of Haiti: Race and the Literary History of the Haitian Revolution in the Atlantic World, 1789-1865 (Liverpool, 2015), and editor of the forthcoming collection, An Anthology of Haitian Revolutionary Fictions. Her articles have appeared in numerous scholarly journals, including Studies in Romanticism, L’esprit createur, Small Axe, Nineteenth-Century Literature, Comparative Literature, South Atlantic Review, Research in African Literatures, and J19. She is also co-editor and co-creator of H-Net’s scholarly network, H-Haiti, and she curates the websites, http://haitianrevolutionaryfictions.com and http://lagazetteroyale.com.