Aristocracy in America: From the Sketch-Book of a German Nobleman 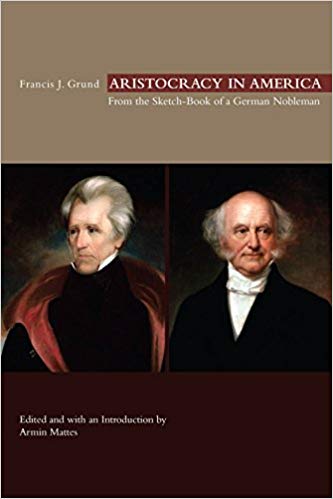 In Jacksonian America, as Grund exposes, the wealthy inhabitants of northern cities and the plantation South may have been willing to accept their poorer neighbors as political and legal peers, but rarely as social equals. In this important work, he thus sheds light on the nature of the struggle between “aristocracy” and “democracy” that loomed so large in early republican Americans’ minds.

Francis J. Grund, a German immigrant, was one of the most influential journalists in America in the three decades preceding the Civil War. He also wrote several books, including this fictional, satiric travel memoir in response to Alexis de Tocqueville’s famous Democracy in America. Armin Mattes provides a thorough account of Grund’s dynamic engagement in American political and social life and brings to light many of Grund’s reflections previously published only in German. Mattes shows how Grund’s work can expand our understanding of the emerging democratic political culture and society in the antebellum United States.

“Mattes has done historians a real service by contextualizing and annotating a primary source that, among its many discernments, finds inequality in America, not in the political and economic spheres, but in a pseudo-aristocratic social elitism.”

—Kevin Butterfield, Director of the Institute for the American Constitutional Heritage at University of Oklahoma and author of The Making of Tocqueville’s America

Author:
Armin Mattes is an editor at the James Madison Papers (University of Virginia Press) and former Postdoctoral Fellow at the Kinder Institute. He is author of Citizens of a Common Intellectual Homeland: the Transatlantic Context of the Origins of American Democracy and Nationhood, 1775-1840.