From Oligarchy to Republicanism: The Great Task of Reconstruction 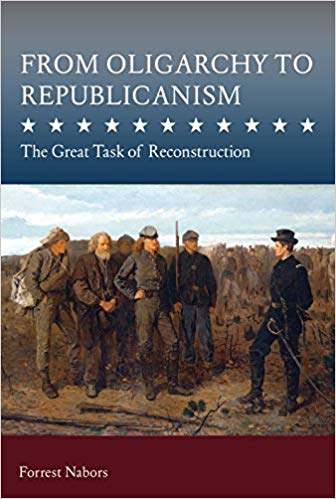 On December 4, 1865, members of the 39th United States Congress walked into the Capitol Building to begin their first session after the end of the Civil War. They understood their responsibility to put the nation back on the path established by the American Founding Fathers. The moment when the Republicans in the Reconstruction Congress remade the nation and renewed the law is in a class of rare events. The Civil War should be seen in this light.

In From Oligarchy to Republicanism: The Great Task of Reconstruction, University of Alaska-Anchorage Professor Forrest A. Nabors shows that the ultimate goal of the Republican Party, the war, and Reconstruction was the same. This goal was to preserve and advance republicanism as the American founders understood it, against its natural, existential enemy: oligarchy. The principle of natural equality justified American republicanism and required abolition and equal citizenship. Likewise, slavery and discrimination on the basis of color stand on the competing moral foundation of oligarchy, the principle of natural inequality, which requires ranks.

This book presents a shared analysis of the slave South, synthesized from the writings and speeches of the Republicans who served in the 38th, 39th or 40th Congress, from 1863-1869, to show how the Republican majority, charged with the responsibility of reconstructing the South, understood the South. In particular, Nabors focuses on how these writings and speeches reflected a deep understanding of the degree to which slavery’s existence transformed the character of political society not only in the nation but also the region, and thus how the insurrectionary states’ government had to be reconstructed at their very foundations for full political liberty to be restored.

“This path-breaking passionately argued study frames Reconstruction rightly for the first time since Reconstruction itself. Returning to what politicians North and South actually said and did, Forrest Nabors shows how the Confederacy masked a regime of oligarchy with such slogans as “States’ Rights” and the “positive good” of slavery. He further shows how Reconstruction aimed to settle the Civil War by restoring the rebel states to the genuine republicanism they had espoused during the American Revolution and had pledged to honor in the Constitution’s republican Guarantee Clause.” —Will Morrisey, author of Self-Government, the American Theme: Presidents of the Founding and Civil War

“Forrest Nabors has performed a tremendous service. Aided by Aristotelian regime analysis, he uncovers—or recovers—an understanding of ‘the supreme cause’ of the American Civil War. Delving deeply into original source material (especially the speeches and writings of the Republicans who served in the Reconstruction Congresses), Nabors establishes that the ‘irrepressible conflict’ should be understood, and was understood at the time, as a conflict between oligarchy and republicanism. This landmark contribution ought to reshape our understanding of the Civil War, the difficulties and failures of Reconstruction, and the Guarantee Clause of the Constitution. Nabors listens, philosophically, to historical actors, and thereby achieves a fuller understanding of the motive force behind the perversities of racism and white supremacy.” —Diana J. Schaub, Professor of Political Science, Loyola University Maryland

Author:
Forrest A. Nabors isn Assistant Professor in the Department of Political Science at University of Alaska-Anchorage.