John Henry Wigmore and the Rules of Evidence 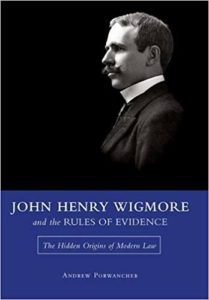 At the dawn of the twentieth century, the United States was reeling from the effects of rapid urbanization and industrialization. Time-honored verities proved obsolete, and intellectuals in all fields sought ways to make sense of an increasingly unfamiliar reality. The legal system, in particular, began to buckle under the weight of its anachronism. In the midst of this crisis, John Henry Wigmore, dean of the Northwestern University School of Law, single-handedly modernized the jury trial with his 1904-1905 Treatise on evidence, an encyclopedic work that dominated the conduct of trials. In doing so, he inspired generations of progressive jurists—among them Oliver Wendell Holmes, Jr., Benjamin Cardozo, and Felix Frankfurter—to reshape American law to meet the demands of a new era. Yet Wigmore’s role as a prophet of modernity has slipped into obscurity. This book provides a radical reappraisal of his place in the birth of modern legal thought.

“[This book] will become the standard work on the subject, and more than that will contribute to emerging clarity in the field of early twentieth-century legal ideas more broadly” —Noah Feldman, Professor of Law, Harvard University Law School, author of Cool War: The Future of Global Competition

Published:
University of Missouri Press, May 2016

Andrew Porwancher is an Assistant Professor of Classics & Letters at Oklahoma University and a core faculty member of OU’s Institute for the American Constitutional Heritage. He is the author of The Devil Himself: A Tale of Honor, Insanity, and the Birth of Modern America, published by Oxford University Press in 2016.