The Federalist Frontier: Settler Politics in the Old Northwest, 1783-1840 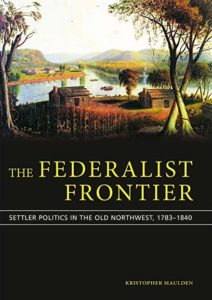 The Federalist Frontier traces the development of Federalist policies and the Federalist Party in the first three states of the Northwest Territory—Ohio, Indiana, and Illinois—from the nation’s first years until the rise of the Second Party System in the 1820s and 1830s. Relying on government records, private correspondence, and newspapers, Kristopher Maulden argues that Federalists originated many of the policies and institutions that helped the young United States government take a leading role in the American people’s expansion and settlement westward across the Appalachians. It was primarily they who placed the U.S. Army at the fore of the white westward movement, created and executed the institutions to survey and sell public lands, and advocated for transportation projects to aid commerce and further migration into the region. Ultimately, the relationship between government and settlers evolved as citizens raised their expectations of what the federal government should provide, and the region embraced transportation infrastructure and innovation in public education. Historians of early American politics will have a chance to read about Federalists in the Northwest, and they will see the early American state in action in fighting Indians, shaping settler understandings of space and social advancement, and influencing political ideals among the citizens. For historians of the early American West, Maulden’s work demonstrates that the origins of state-led expansion reach much further back in time than generally understood.

“Kristopher Maulden has written a path-breaking book that will change the way historians think about and teach the early national era, especially in their understanding of the importance and longevity of the Federalist Party. This well-written, carefully-researched study brings to light the crucial role of Federalist ideology in building cultural, political, and economic institutions that helped create the American state and facilitated expansion into the west. Maulden also presents a sensitive discussion of the federal government’s relationship with Indians who lived in the region. Maulden argues persuasively that the Federalist Party, in structuring an orderly society governed by well-educated men of property, developed a long-lasting legacy that reached into the 1840s. This important book will be of great value to scholars and students of the political and economic development of America’s emerging Republic.” —Silvana R. Siddali, Saint Louis University, author of Frontier Democracy: Constitutional Conventions in the Old Northwest

“Thomas Jefferson is too often considered the sole architect of the United States’ ‘Empire of Liberty,’ but Kris Maulden’s new book recovers the critical role that Jefferson’s Federalist foes played in colonizing a continent. The Federalist Frontier is an important corrective that explains the ways in which Federalist ideology continued to shape American Empire long after the party’s demise.” —Lawrence B. A. Hatter, Washington State University, author of Citizens of Convenience: The Imperial Origins of American Nationhood on the U.S.-Canadian Border

Author:
Kristopher Maulden received his Ph.D. in History from University of Missouri