A Fire Bell in the Past, The Missouri Crisis at 200: Vol 1, Western Slavery, National Impasse 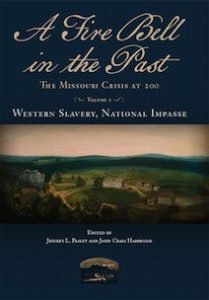 Many of the original essays in this volume began as papers presented at an international conference sponsored by the Missouri Humanities Council and the Kinder Institute on Constitutional Democracy, A Fire-Bell in the Past: Re-assessing the Missouri Crisis at 200, held at the University of Missouri at Columbia on February 15-16, 2019. In an attempt not only to reassess but add to historians’ understanding of the full scope of the causes and consequences of what came to be known as the Missouri Crisis, on a regional and national basis, the editors extended their invitation for scholarly works beyond the conference, ending up with too many first-rate and important new additions to the historiography than could be presented in this first volume. With the second volume slated for Fall 2021 publication, this unique work is perfectly timed to mark Missouri’s Bicentennial.

“The essays in A Fire Bell in the Past are brilliant commentaries on one of the most pivotal events in American history. These fresh perspectives on the Missouri Crisis breathe new life into this much-written about subject, and could not be more timely given our current-day grappling with the question of race and citizenship.” —Annette Gordon-Reed, Harvard University, author of On Juneteenth

“This book will reset the standard by which historians understand the Missouri Crisis, the politics of slavery, and the Early National era more broadly. The editors did an outstanding job of bringing together scholars who approach the topic from a variety of perspectives, and in doing so, not only re-center the Missouri Crisis historiographically, but offer compelling new lenses through which all historians will need to consider the political history of slavery and anti-slavery in the early United States.” —Ryan A. Quintana, Wellesley College, author of Making a Slave State: Political Development in Early South Carolina

“Because the achievement of statehood by Missouri was tied to the expansion of slavery, its two hundredth anniversary is a problem for those who want their commemorations to be celebrations. But what makes Missouri’s admission a bad bicentennial for the state’s boosters makes for really good scholarship in A Fire Bell in the Past. These bold essays ring loud, awakening readers to how much this crisis mattered—and still matters.” —Stephen Aron, UCLA and Autry Museum of the American West, author of American Confluence: The Missouri Frontier from Borderland to Border State

“Two centuries ago, the federal union barely survived the ramifying crises surrounding Missouri’s admission to the union. The fine essays in Pasley and Hammond’s splendid new collection constitute the best kind of bicentennial commemoration, offering a broad array of provocative, timely, and deeply sobering reflections on this defining moment in American history.”—Peter S. Onuf, University of Virginia, co-author of “Most Blessed of the Patriarchs”: Thomas Jefferson and the Empire of the Imagination

Editors:
Jeffrey L. Pasley is Professor of History and Associate Director of the Kinder Institute on Constitutional Democracy at the University of Missouri. He is the author of The First Presidential Contest: 1796 and the Founding of American Democracy and lives in Columbia, Missouri.

John Craig Hammond is Associate Professor of History and Assistant Director of Academic Affairs at Penn State University–New Kensington and author of numerous books and articles on slavery and politics in the early American republic. He lives in suburban Pittsburgh.