A Fire Bell in the Past, Volume II: “The Missouri Question” and Its Answers 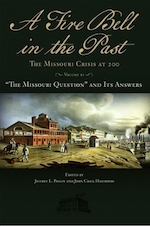 Many new states entered the United States around 200 years ago, but only Missouri almost killed the nation it was trying to join. When the House of Representatives passed the Tallmadge Amendment banning slavery from the prospective new state in February 1819, it set off a two-year political crisis in which growing northern antislavery sentiment confronted the aggressive westward expansion of the peculiar institution by southerners. The Missouri Crisis divided the U.S. into slave and free states for the first time and crystallized many of the arguments and conflicts that would later be settled violently during the Civil War. The episode was, as Thomas Jefferson put it, “a fire bell in the night” that terrified him as the possible “knell of the Union.”

Drawn from the participants in two landmark conferences held at the University of Missouri and the City University of New York, those who contributed original essays to this second of two volumes—a group that includes young scholars and foremost authorities in the field—answer the Missouri “Question,” in bold fashion, challenging assumptions both old and new in the long historiography by approaching the event on its own terms, rather than as the inevitable sequel of the flawed founding of the republic or a prequel to its near destruction.

“Like its companion volume, this collection brings new methods and historical questions together with the field of political history. In so doing, the authors situate the Missouri Crisis era firmly within early American history, while also explaining how the story fits within new histories of slavery and the movement to reexamine the founders’ connections to the institution of slavery.”

—Kelly M. Kennington, Auburn University, author of In the Shadow of Dred Scott: St. Louis Freedom Suits and the Legal Culture of Slavery in Antebellum America

“A solid collection of historical writing that offers the reader a broad array of perspectives by which to reconsider some aspects of the Missouri Crisis and consider others for the first time. I look forward to suggesting it to students and professionals seeking a deep, but accessible, understanding of this important event in American history.”

—John Reda, Illinois State University, author of From Furs to Farms: The Transformation of the Mississippi Valley, 1762-1825

Editors:
Jeffrey L. Pasley is Professor of History and the Associate Director of the Kinder Institute on Constitutional Democracy at the University of Missouri. His most recent book is The First Presidential Contest: 1796 and the Founding of American Democracy, a finalist for the George Washington Book Prize.

John Craig Hammond is Associate Professor of History and Assistant Director of Academic Affairs at Penn State University–New Kensington and author of numerous books and articles on slavery and politics in the early American republic. He lives in suburban Pittsburgh.