The Pursuit of Happiness in the Founding Era: An Intellectual History 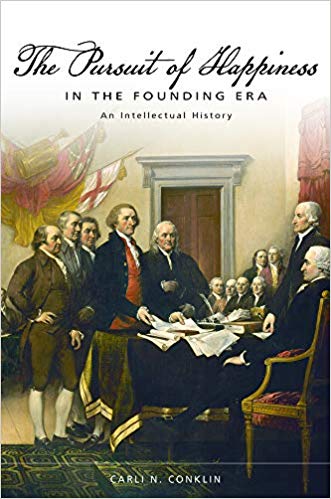 Scholars have long debated the meaning of the pursuit of happiness, yet have tended to define it narrowly, focusing on a single intellectual tradition, and on the use of the term within a single text, the Declaration of Independence. In this insightful volume, Prof. Carli N. Conklin considers the pursuit of happiness across a variety of intellectual traditions and explores its usage in two key legal texts of the Founding Era, the Declaration and William Blackstone’s Commentaries on the Laws of England.

For Blackstone, the pursuit of happiness was a science of jurisprudence, by which his students could know, and then rightly apply, the first principles of the Common Law. For the founders, the pursuit of happiness was the individual right to pursue a life lived in harmony with the law of nature and a public duty to govern in accordance with that law. Both applications suggest we consider anew how the phrase, and its underlying legal philosophies, were understood in the founding era. With this work, Conklin makes important contributions to the fields of early American intellectual and legal history.

“Few phrases resonate more deeply in US history than ‘the pursuit of happiness.’ When Thomas Jefferson included those words in the Declaration of Independence, in his litany of cherished birthrights, he launched a still-unresolved debate over the precise meaning of the phrase. With this insightful study, Conklin assumes a prominent role in [and] makes an important contribution to an evolving cross-disciplinary conversation. It deserves a broad audience.” —M.R. Scherer, University of Nebraska-Omaha, author of Rights in the Balance: Free Press, Fair Trial & Nebraska Press Association v. Stuart

“Professor Conklin is one of those exceedingly rare and invaluable scholars who unites in a single analysis of the founders’ thought the four traditions that most influenced them—the classical heritage, Christianity, the English legal tradition, and the Scottish Enlightenment—rather than advocate for the primacy of a single heritage. She presents a cogent argument that the glue that held these diverse influences together was their shared conception of ‘the pursuit of happiness.’” —Carl Richard, University of Louisiana at Lafayette, author of The Battle for the American Mind: A Brief History of a Nation’s Thought